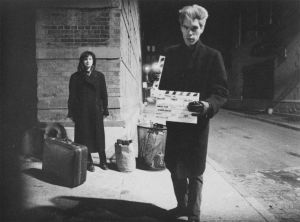 Jim Jarmusch is one of those directors I think that you either love, hate or are unsure about but appreciate the uniqueness of his work.

I really first discovered him with one of his Coffee & Cigarettes shorts that I saw when I was a teen. Then I saw Dead Man and shortly after that, Ghost Dog. That’s when I discovered that these interesting things were all created by the same guy. Since that point, I’ve been a fan.

I don’t always like all of his films but they all are effective, as far as provoking thoughts and ideas and showing life in a way that it might not have been shown before. That is what makes a director successful, in my book. It isn’t about how much shit you can blow up and how many Disney films you can get on your resume, it is whether or not you left some sort of long-lasting impact on the viewer. Jarmusch more than delivers in that regard.

Also, he was a part of the New York punk scene in the late ’70s and early ’80s and got to spend time around people like Warhol, Basquiat, the New York Dolls, Richard Hell, Iggy Pop, Blondie, Fab 5 Freddy and a bunch of others.

Plus he directed Wu-Tang Clan and Bill Murray in the same scene. I mean, dude… what’s cooler than that?

1. Dead Man
2. Down by Law
3. Night On Earth
4. Stranger Than Paradise
5. Mystery Train
6. Coffee and Cigarettes
7. Broken Flowers
8. Only Lovers Left Alive
9. Ghost Dog: The Way of the Samurai
10. Permanent Vacation
11. The Limits of Control
12. Year of the Horse (documentary)