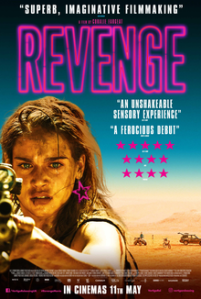 This is a film that critics loved. The audience score for the film has been much lower, however. But Hollywood insiders like these type of movies and tend to look past whatever issues it might have because the film carries some sort of political or social message that is long overdue. Of course, that just makes them look ignorant, as this is hardly the first film of its kind. It’s just the first that is “artistic” enough and with the right kind of polish for them to want to put their stamp on it. Because they certainly didn’t feel that way about I Spit On Your Grave in 1978. But when you scroll through the top reviewers on Rotten Tomatoes, it’s almost completely made up of white men. White men feeling the guilt of their peers for whatever social justice code they all have to live by for fear of being called a “misogynist” or a “bigot” and being ousted from their insider community.

Anyway, sociopolitical rant aside, looking at this as a body of work it isn’t as great as the professional critics want you to think it is. It’s also not bad and it’s mostly well made.

The story is simple, a mistress and the married guy she’s fucking go to Morocco where he meets up with two of his buddies for their annual hunting trip. The girl turns the sex appeal up really high and gets all the men sexually worked up because it’s three dudes, one sexy girl and a desolate location. So it’s obvious where this is going, right?

Somehow she survives though, with a branch stuck through her. She then painfully traverses the desert picking off the three men with no sort of real survival skills in her repertoire.

This type of film has existed for a very long time and there are dozens of movies like this. Hell, look at Kill Bill. There wasn’t a rape in that one but she was murdered by her lover and friends and had her baby stolen from her. Kill Bill, Vol. 1 and 2 are much better movies than this. But those didn’t come out at the height of all the #MeToo stuff. That’s why this film has gotten the admiration it’s received. It’s all timing and politics.

Now the film is well acted, the cinematography is pretty great and this does an incredible job of building tension. However, it also overdoes it with the tension by the time you get to the end. The final scene where the girl and the last guy are running around in circles was so drawn out that I wanted to hit fast-forward. This turned from a suspense revenge thriller to a Looney Tunes cartoon in the last five minutes.

A lot of the critics also talked about how gory this was. It isn’t gory in the way that gore films are gory. There is a lot of blood and a few cringe-worthy scenes like one guy pulling glass out of his foot but if you’ve gotten through Blood Feast or something like Hostel, then you’ll be fine. I’ve seen more blood in an episode of True Blood, honestly.

Anyway, I only have two actual complaints.

One, the editing was strange in some sequences. When the girl is sexy dancing and grinding on her future rapist, they keep cutting to a professional wrestling match on the television. I don’t know, is this some artistic way of implying “toxic masculinity” or something? When a girl grinds on a dude’s dick, he suddenly wants to slap her into a figure four leglock?

Two, the film could have been more effective at 80 minutes instead of 108. Big portions of this film are too stretched out. There were chunks of the movie where I was bored. It generally did a good job building tension but it felt as if it was trying too hard to do that and it brought that build to a screeching halt too many times. The sequence of the girl writhing in a cave should have been trimmed down.

Realistically, this has the same problem that a lot of modern movies do. Everyone in it is a shitty person. It’s hard for me to care about a character when there isn’t something pure in their spirit. I wanted the victim to get her revenge but when she’s just some mistress that only cares about going to Hollywood to be a star, I’ve already started the film not liking her. Obviously rape is fucking terrible and that guy should have his dick cut off but it’s hard to get invested in an unlikable, one-dimensional character no matter where the story takes her. She really had no story and just represented an archetype. An archetype that most people look down their nose at.

Revenge is a film that had a lot working for it but it doesn’t deliver in the ways that it should have. It’s not all that original and it doesn’t live up to some of the films with a similar theme and plot. However, it’s still nice to look at and it shows promise for the director, as this was her first feature film. Had the pacing been fine tuned more, this could’ve been much better.

Rating: 6.25/10
Pairs well with: What it borrows heavily from, the original I Spit On Your Grave and its remake, as well as Thoroughbreds, Unsane and Under the Skin.