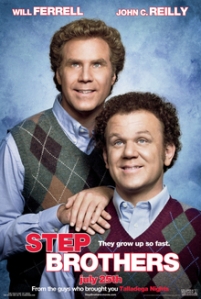 “I wanna roll you up in a little ball and shove you up my vagina… You could just live there, it’s warm and it’s cozy… Oh I’d just walk around with you in there and just knowing, whenever I feel a little tickle or scratch it’s your hair on my vagina!” – Alice

Full disclosure, I’m not a huge Will Ferrell fan. I did like him on Saturday Night Live, in an era where the show was good, and I do like his chemistry with John C. Reilly. But still, that’s not enough to make this film work for me.

The problem is that Will Ferrell’s comedies have a few jokes that land but they’re usually lost in a sea of misses. And really, most of his jokes have been recycled to death and predate him.

I do like a lot of stupid comedies but Ferrell’s don’t do much to help that genre evolve. He relies on low brow humor and by milking the same cow that the worst comedians have been milking for decades. He just makes his movies zanier, which I guess is supposed to make them funnier.

Now I mostly liked this film the first time that I saw it but it’s not something that I ever needed to watch again. Also, from a narrative standpoint, nothing that happens here matters or holds any sort of weight. There really isn’t much of a story, there’s just a plot thread set up to weave together a bunch of fart and dick jokes. Also, there’s the obligatory over the top profanity because yelling out “fuck” in the middle of a joke’s delivery makes it funnier or something.

I don’t want to sound like I’m shitting on the guy or this movie but by the time that this did come out, his shtick really ran dry for me. Although, I do have friends that adore this movie for some reason.

It is funny in parts and the two leads have charm and always seem to work well off of one another. However, Reilly has proven he’s a much better actor than this and he’s actually superior to Ferrell in regards to his comedic roles.

I don’t know, this is just a stupid film to me. It doesn’t have a lot of replay value and I have to deduct points off of any movie that has Rob Riggle in it. When people were boycotting the NFL because of freedom of expression being un-American, I was boycotting it because Rob Riggle was hired to work on a Sunday pregame show.

Anyway, I really like and respect Mary Steenburgen, so I’ll say that she’s a beaming light of sunshine and positivity in this but I really don’t need to ever watch this again because I saw this movie before it was even made.