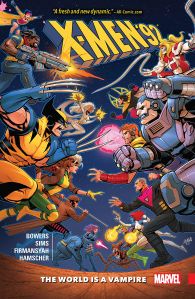 If you were a kid in the ’90s, you probably watched the X-Men cartoon that used to be on Fox on Saturday mornings. It was solid, did a pretty good job of adapting some of the comic book’s big storylines and introduced a lot of non-comic reading kids to the X-Men franchise.

It ended after a few seasons and never really had a proper follow up. Well, that is until recently, as the show moved into the medium it was born out of: comic books.

Maybe this took its cues from DC Comics and how they came out with Batman ’66, a comic book series that revisited the 1960s Adam West Batman TV series. But one can’t deny that Batman ’66 was a cool comic, a great idea and with that, should have inspired other comic books that continued the stories of comic book characters as they were presented in other mediums. Hell, I’m still waiting for that Batman ’89 comic that was once teased and then had those teases retracted.

But this is about X-Men ’92, which was a decent follow up to the animated series.

Overall, this was a fun read but it didn’t wow me in the same way that Batman ’66 did. Where that Batman comic felt tonally right and as if it was a true continuation of the series, X-Men ’92 throws some weird curveballs and also tries to force in way too many characters just for the sake of the creators trying to give you the animated series’ versions of these characters.

Maybe they knew this series would be short lived and therefore, they wanted to wedge in every character they could but it really becomes too much to process in the second half of this series. Also, I wasn’t a fan of devoting so much time to a Dracula/vampire story. None of that was central to the core of the cartoon and it shouldn’t have been central to the core of this comic.

Also, this feels like it is just borrowing the visual style of the TV show but it doesn’t seem to understand the tone or the spirit of it.

It’s still entertaining for fans of the source material but I wouldn’t call it a must read or all that necessary. Die hards should check it out but I can see why this didn’t make it a year where Batman ’66 has still been hanging on for quite awhile with a long running series and several crossovers.

Rating: 6.75/10
Pairs well with: the animated series it’s based on, as well as ’90s X-Men comics and various spinoffs.