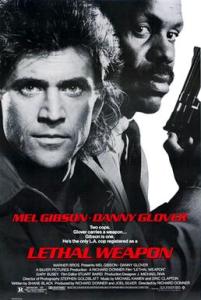 “I’m too old for this shit!” – Roger Murtaugh

Since there have been rumblings, once again, about Lethal Weapon 5, I was reminded that I haven’t really watched the original film in quite awhile. So, since I have the DVD box set, I figured that I’d give them all a rewatch and a review.

I actually forgot how dark this first film was in regards to Martin Riggs’ depression and suicidal thoughts. Sure, I remember that part of the story but I see a lot more layers with it now, as an adult that has dealt with depression his entire life and many of the experiences and thoughts that come with it. I can also relate to the loss and grief that Riggs felt over his wife’s death, as I lost someone very close to me, which had me in a similar head space for a few years.

As a kid and a teen, I don’t think I understood the real depth of Riggs’ despair and I also didn’t fully understand how this is a movie about a broken man finding something to live for and that he is essentially adopted by a family that grows to love him as one of their own. And honestly, I’m not sure if Shane Black’s script meant to take it that deep but Mel Gibson and Danny Glover add so much to their roles and this story, emotionally, that lesser actors couldn’t have achieved this on quite the same level with this much human emotion.

That being said, the film is really about a man emerging from absolute darkness and finding his way in the world again. And while this isn’t the main plot thread of the sequels, it helped to establish the bond between Riggs and Murtaugh so well, that the emotions and connections in this film created such a strong foundation that it made the camaraderie in the sequels natural and frankly, easy.

The movie is an action comedy, despite the really heavy emotional stuff, and within that, it has a great balance between the darker stuff and its lighthearted playfulness. It’s also full of badass action and just makes me wish that Hollywood could still make pictures like this that are this good.

Action comedies in the modern era just don’t hit the right notes. You can’t compare any of those Kevin Hart buddy action comedies to the Lethal Weapon films and that’s not a knock against the talented Hart, I think it is just a product of the times we live in and their contrast to what the 1980s (and ’90s) were.

A lot of the credit has to go to Richard Donner, who was on his A-game as a director in the ’80s, as well as producer Joel Silver, a man that was involved with some of the most iconic films of all-time, especially in this era and the action genre.

But it all really comes back to the greatness that is the pairing of Gibson and Glover. They’re bond and their banter is absolute perfection. You buy into what they’re selling and they feel like they’re your friends too. On top of that, Glover’s family is great and they make the scenes they share with the two leads pretty special.

While the actual plot dealing with the crime element in the film is a bit thin, it’s still interesting and it also brings in great performances from Gary Busey, Tom Atkins and the grossly underappreciated Mitchell Ryan. I also love seeing and hearing Al Leong actually speak in this beyond just being a voiceless henchman.

On top of all that, the action sequences are superb, the stunts are fantastic and this is a movie that still packs a punch and is just as exciting as it was over thirty years ago.

Lethal Weapon is a stupendous film. It has the greatest tandem in buddy cop movie history and it has aged tremendously well.

Rating: 9.25/10
Pairs well with: the other Lethal Weapon films, as well as most ’80s buddy action movies.