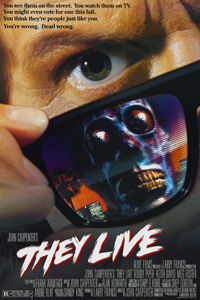 “I have come here to chew bubblegum and kick ass… and I’m all out of bubblegum.” – Nada

I remember wanting to see this in the theater so damn badly but no one would take me because I was nine years-old and my family was being really lame about it. To make up for that, I rented the hell out of this when my local video store got their copies in. In fact, I eventually dubbed a copy because that was the benefit of having two VCRs in the ’80s and ’90s. I think I still have it buried in one of my many boxes of old VHS tapes that I haven’t been able to play for fifteen years.

Anyway, They Live is a spectacular film.

While it’s not John Carpenter’s best, it’s pretty high up on the list and it is my favorite film to star wrestling legend “Rowdy” Roddy Piper. Considering that this also has Keith David in it, there’s almost too much testosterone and gravitas that I don’t know how the celluloid didn’t melt from the masculine heat.

The story is pretty simple: “Rowdy” Roddy Piper shows up in town, tries to earn some honest money and work towards the American dream but soon finds out that the world is completely fucked because it’s been taken over by aliens hiding in plain sight. How does he discover this truth? With special sunglasses. Seriously, what the fuck is there not to like about this picture?

Also, this has, hands down, the greatest one-on-one brawl in the entire history of Western cinema. A fight so epic and so perfect that its choreography was stolen for the infamous “Cripple Fight” episode of South Park.

As is usually the case with most Carpenter films, this one benefits greatly from his score. It’s brooding, sets the perfect tone and just has the right kind of vibe to enchant your mind and pull you into this cool and crazy film.

I also like the physical atmosphere in general and how Carpenter used daytime and nighttime as a sort of narrative tool, drawing allusions to the seen world and the unseen world in this story. I also liked how the special sunglasses displayed reality in black and white while the visible world was in full color. I’m not sure if that was decided upon in the initial draft of this story or if it was a convenience in pulling off certain effects that still worked and added another layer of duality.

They Live is just solid, all around. It’s one of those movies I can watch anytime and it’s just cool as hell.