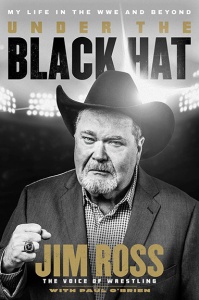 This book is really a continuation of Jim Ross’ first autobiography, Slobberknocker. This one picks up right where that one left off and it talks about Ross’ career from the early ’00s and onward, leading up to his recent job as the lead commentator for the new company, All Elite Wrestling.

The stories here are fantastic and Jim has a great memory, as he recalls the details and dialogues he had with all the great characters that were a part of his life in the wrestling business.

I especially like hearing his take on the angles where Vince McMahon used J.R. as a character in storylines and how that all played out behind the scenes, as he worked with Steve Austin, the Undertaker, Jerry Lawler and Michael Cole.

The book also really gives you J.R.’s perspective on his relationship with Vince McMahon, his leaving the company, multiple times, and how things went when he was negotiating with Dixie Carter of TNA, as well as his time working for New Japan.

If you have read the first book and loved it as much as I did, this is definitely something you need to pick up. Jim Ross comes off as honest, sincere and doesn’t really hold back. The guy is a legend in his industry and deservedly so.

Rating: 9/10
Pairs well with: JR’s previous book Slobberknocker, as well as other wrestling biographies and books about the business side of things.