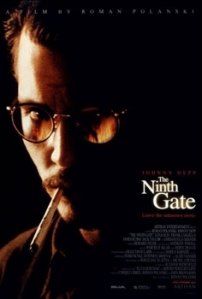 “There’s nothing more reliable than a man whose loyalty can be bought for hard cash.” – Boris Balkan

I don’t know what it is about this movie but I’ve probably watched it more times than anyone else I’ve ever met because it enchants me and grabs my attention. Something about it is cool, mesmerizing and weirdly soothing.

I also like that it blends supernatural, biblical horror with film-noir. Horror and noir were always a really good thing when paired up and a lot of those early RKO horror films that Val Lewton produced, showcased the blending of these genres exceptionally well.

This is directed by Roman Polanski, who made one of the greatest neo-noir movies of all-time with 1974’s Chinatown. Here, he takes some of that noir experience and adds it to a more contemporary film. And like Chinatown, this moves at a slow and steady pace but definitely not a boring one. The film is a slow burn all the way up to its finale, which I thought was pretty neat and satisfying.

The plot plays out like a game. You have a very rich publisher that hires a rare book dealer to track down the other copies of an extremely rare book that could very well be tied to the Devil. With that, he sets off on this adventure and crosses paths with a lot of mysterious people who have their own agendas, most of them being pretty sinister. The book dealer also gets assistance from a mysterious, unnamed girl, whose motivations are never clear. Later on, we also see that this girl has powers that make you wonder if she’s an angel or a fallen angel or even possibly a demon or some important biblical character.

There’s a Satanic cult, murder plots, twists, turns and serious curveballs that I didn’t see coming the first time I viewed this film. All the while, it does seem pretty clear that one of these people is pulling a lot of the strings.

The atmosphere of the film is one of the things that make this such a visually beautiful picture. While a lot of that has to do with the general cinematography, I think that the score by Wojciech Kilar is stellar and really gives this movie its life and energy while enhancing those visuals.

This is also one of my favorite roles that Johnny Depp has ever played and I thought that his fairly chill, almost understated performance was perfect for the tone of the story. I also thought that Frank Langella was magnificent and this is my favorite thing that he’s done besides Skeletor and Dracula.

The Ninth Gate was a movie that came out and seemed to be completely overlooked. Still, I know that most people haven’t seen it, over two decades later. It reminds me of the ’70s style of serious, religious horror. If that stuff is your thing, this should be right up your alley.