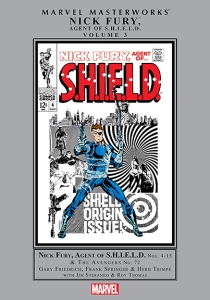 I started with Masterworks, Vol. 3 because it is a collection of what’s considered to be the most beloved work featuring Nick Fury, as the solo star of his own stories.

This also takes the character, puts him in S.H.I.E.L.D. and makes him a cool, hip superspy, as opposed to a military hero on the battlefields of war.

Marvel, like everyone else at the time, wanted to capitalize off of the ’60s spy craze that started with the first James Bond film, Dr. No in 1962. That movie inspired its own sequels, a slew of rip-offs, parodies, pulp novels and comics. So, instead of creating a new character, Marvel reworked one that was already pretty popular but existed in a genre that was drying up.

A lot of this is written and has art done by Jim Steranko. A lot of people worked on the issues in this collection, though, but Steranko is the guy that has always been given most of the credit for this groovy reinvention of Nick Fury.

Tapping into the ’60s era spy genre, this is trippy and colorful and it stands out in a really unique way when compared to the other Marvel titles of the time. I love the hell out of the art and the style in these comics and it’s why I’ve picked up a lot of the single issues, over the years.

I was never as captivated by the stories, as much as I was by the visuals, however. But the stuff featuring Nick Fury fighting Hydra and the multi-issue arc pitting him against the Hate-Monger were really damn enjoyable.

I never got to read all of these issues and experience the bigger picture. I’m glad that I finally did, though, as it’s really different than what was the standard ’60s Marvel fare. Plus, it’s also infinitely better than anything Marvel’s doing these days. 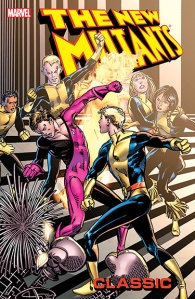 Man, this comic series is so damn good. I had a few reservations about revisiting it since my childhood (and in its entirety) but it hasn’t disappointed and for being Marvel’s “teen” comic in the ’80s, it still deals with some really heavy and adult subject matter.

This volume is no different and it keeps things moving forward swiftly, collects a few different story arcs and further develops these characters and their relationships quite superbly.

I think the thing that I liked most in this volume was the story with the Hellions, as you now see them more clearly, especially Thunderbird, who would later become Warpath on the X-Force and X-Men teams of the ’90s and beyond.

In that Hellions story, we really get to understand that only one of the kids is truly bad and the others are just teens going through their own growing pains. Teens that have more in common with the New Mutants team than differences. In the end, they’re all just kids, dealing with their own issues that just happen to belong to different schools of thought, figuratively and literally.

This collection also features another X-Men crossover story. This time it sees them have to outwit the villain, Mojo. We also have the second Legion story, where he goes off the rails and has to be reeled back in for the safety of himself and the others around him.

Chris Claremont truly put as much time and care into these characters and stories as he did the X-Men. This is just another solid string of stories, as all the X-Men books build towards the big Inferno crossover event, which happens immediately after the next volume of New Mutants comics.

Rating: 8.75/10
Pairs well with: other New Mutants comics, as well as the other X-Men related titles from the ’80s.

I’ve been going back and picking up a lot of ’70s Doctor Strange floppy issues, lately. Mainly, I love Marvel’s art style with their fantasy and horror titles from the decade and Doctor Strange had some of the best covers from that time. But after reading a few of the singles issues, I wanted to delve into a much larger chunk, so I gave this huge Epic Collection release a read.

This actually focuses on the end of Doctor Strange’s first solo series, his complete run in Marvel Premiere and then the first handful of issues of his second solo series.

This also features a ton of great artists and writers, as well as adapting some of H.P. Lovecraft’s characters and concepts into the Marvel Universe, beyond what was done in just the Conan titles.

Furthermore, this collection features just about all of the major Doctor Strange villains of the era with a lot of emphasis on Nightmare.

This was, hands down, one of the best Doctor Strange trade paperbacks I have ever read and it only solidified my love for the character from this era. It also kind of made me wish they’d have done something with Strange and Conan back in the ’70s due to the Lovecraftian flavor of this book.

I’ll be in search of other hefty collections of Doctor Strange from the ’70s and early ’80s because this was just damn cool and featured so much imagination and stupendous art. I wish people didn’t sleep on old school Doctor Strange, it’s really, really great stuff. 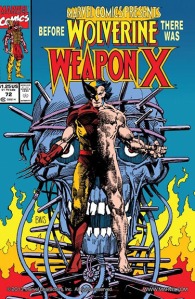 From issues 72 through 84 of Marvel Comics Presents, the world was given one of the greatest comic character origin stories ever put to paper. In fact, it may be the best, as it is an absolute masterpiece of visual storytelling.

This is a story that has since been told in cartoons, live action movies and countless other mediums that have featured the Wolverine character. None of them, however, quite capture the true horror of the story. And that’s really what this is at it’s core: horror.

It starts with a younger Wolverine being beaten and abducted. He’s taken to a lab where he is experimented on and ultimately, gets his indestructible adamantium skeleton and claws.

It’s the long painful process that is center stage in the story. Wolverine is poked, prodded and has his body filled with molten metal, as his rapid healing power keeps him alive through all of it. The evil scientists strip away his mind but eventually, Wolverine escapes, and attacks his captors like a wild animal.

There are a few twists to the plot but I won’t spoil any of that.

At the time, this may have been the darkest story ever to be published by Marvel. It was intense, incredibly fucked up but it was also perfect, which is due to the great Barry Windsor-Smith, who wrote a stupendous story and illustrated some the best work in his legendary career. 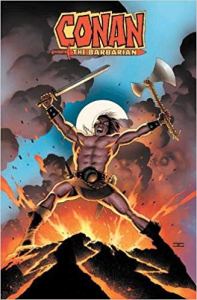 I read this collection of the first 26 issues of Marvel’s original Conan the Barbarian run because I had just read Roy Thomas’ book where he gives in-depth commentary on the first 51 issues.

Also, I’m a big Conan fan but I hadn’t read most of these issues yet, as some of the earliest ones are really expensive now and because I didn’t start collecting Conan comics until this series was well over a hundred issues. I wasn’t born until the very end of ’78 and didn’t really get into buying and collecting comics until ’89.

Anyway, this was really cool to read and just about every issue was a great story with superb art, whether it was the illustration work of Barry Smith, Gil Kane or John Buscema. The book is mostly dominated by the work of Smith and I found his art here to be some of his absolute best.

What’s especially neat about these stories is that some of them are actually adapted from the works of Robert E. Howard and some are original stories made to fit within Howard’s already established universe that predates the comics by about forty years.

Not all of the Howard material that was adapted was actually Conan stories, specifically. Some of them were taken from other characters like Howard’s Kull and then retrofitted into Conan tales.

This collection of issues includes some first appearances and a crossover as well. This is where we see evil sorcerer Thoth-Amon debut, as well as the most popular female sword and sorcery hero of all-time, Red Sonja. As for the crossover, in this book Conan meets Elric of Melniboné, a popular fantasy character that was created by Michael Moorcock in 1961. Elric has gone on to have his own multimedia franchise in the same vein as Conan.

The price tag on this omnibus is pretty hefty but it’s a 700-plus page hardcover and it still costs less than trying to round up all these issues, individually.

Rating: 9.5/10
Pairs well with: other Conan and sword and sorcery comics penned by Roy Thomas.

Overall, this was a pretty cool art book that had enough text and information to give good context to the pages of art that were featured.

My only real complaint is that I wished that this also featured the great art that was used in the Savage Sword of Conan magazines.

But that could be due to a future release where Marvel does another art book focused solely on that unique series.

Plus, this is the art of Conan the Barbarian, as the title specifically states. Although, it also features art from the King Conan series too.

Anyway, this is a pretty cool book to check out if you are a Conan the Barbarian fan. It’s mostly giant art pages with blurbs. But it does have a nice introduction and some pages with more text than those standard blurbs.

Whether or not it’s worth the price point is up to the buyer, I guess. I can’t recommend it as a must own. Full disclosure, I read my friend’s copy and didn’t buy one, even though I was mostly pleased with it.

I’ve been watching through a lot of comic book documentaries on YouTube, lately. I came across this one that discusses the work and legacy of Jack Kirby.

I’m not sure if this was made as a special feature on a DVD, as it was produced by Marvel and 20th Century Fox. Maybe it was included on one of the Fantastic Four DVD releases a decade ago.

Anyway, if you appreciate and admire the great work of Jack Kirby, this is a really engaging documentary.

It is rather short, considering the long career of the man but it does cover a lot of ground. It also interviews a lot of other comic book greats that worked with Kirby or were inspired by him.

This feels like a quickly thrown together low budget fluff piece and if I’m being honest, Jack Kirby deserves a proper documentary or a real biopic. As much as this does talk about how much Jack did, I still don’t feel like it captures the real importance and scale of it all.

But this is still a worthwhile watch because there really isn’t anything better… yet.