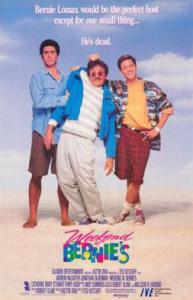 “What kind of a host invites you to his house for the weekend and dies on you?” – Larry Wilson

When this movie came out, I fucking loved the shit out of it. I never quite understood why but over the years, I still find myself revisiting it every so often because it’s just good, hilarious escapism. It also still amazes me how committed Terry Kiser was at playing a dead guy.

Also, Andrew McCarthy and Jonathan Silverman are great in this and they have such natural chemistry that one would have to assume that they were good friends in real life or had become good friends while making this movie. It’s their camaraderie and charm as a duo that also salvaged the very weak sequel.

For those who have never seen this, the story follows two young corporate guys that find a very questionable accounting error and bring it to their boss’ attention in an effort to finally move up the corporate ladder. However, that boss is the one committing fraud, so he invites the duo to his beach mansion in an effort to have them killed. However, the boss’ mobster friend decides to have his hitman kill the boss instead. When the duo arrives at the house, they discover their dead boss but ultimately decide to pretend that he’s alive so they can enjoy the weekend before calling the cops. This confuses the hitman and ultimately puts the target on the duo’s back as well.

The story has noir vibes but I wouldn’t really put it in that genre, as this is really just a goofy buddy comedy and focuses more on their antics with the dead guy than the crime and murder part of the story. Granted, there is still a big showdown with the hitman, that plays well and is really funny in a juvenile, slapstick sort of way.

The film also features Catherine Mary Stewart, a favorite actress of mine since I saw her in The Last Starfighter and Night of the Comet. She plays a love interest for Jonathan Silverman but I thought she was underutilized and really put on the backburner for most of the movie. But she does get to be involved in the finale where the hitman shows up at the house with his two new targets still inside.

Even though this movie feels very ’80s, it’s weirdly timeless in that it could take place anywhere. The gags, as goofy as they are, just work and a lot of that is because of how greatly Terry Kiser embraced the role of playing a dead guy out on adventures.

I can’t say that this is as good of a movie as I thought it was when I was eleven years-old but I still enjoy it enough to throw it on every few years.

“Look, Milo, we’re talking about real life here, okay? Real life is not California. Real life is a shit sandwich and every day you gotta take another bite.” – Grant

Dudes is a pretty cool movie for its time. It sees three teenage punk rockers from Queens go cross-country in an effort to make it to California and hopefully a new, better future.

However, along the way, while camping out in the desert of Arizona, the three teens are attacked by a gang of vicious rednecks and one of the boys is murdered and their stuff is then stolen.

The two surviving teens find the local cops to be useless and ultimately, decide to take down this gang by themselves. Along comes the local tough, hot chick that teaches them how to actually shoot a gun properly.

Now maybe the premise sounds a bit wonky but the story works well within the world that this film creates for itself. Sure, the movie is a comedy but it’s still got a lot of real drama and heart to it. I also think that Jon Cryer was the perfect guy to handle what was needed for the lead role. He’s good at comedy, can handle serious stuff and he’s likable as hell and can give a convincing performance with the right material.

I also really enjoyed Daniel Roebuck as his large, punk rock sidekick. While Roebuck looks like the more imposing of the two, I like that this movie’s plot doesn’t just run with that and it gives us something more realistic where the big punk rocker is more of a gentle giant.

Catherine Mary Stewart was perfect as the local girl. I’ve always loved seeing her ever since I first watched The Last Starfighter, as a kid. Here, she reminds me a lot of her tough girl role in Night of the Comet, which is my favorite role she’s ever played.

Additionally, you have two real musicians in this. Flea from the Red Hot Chili Peppers plays the friend who is murdered by the gang while Lee Ving of Fear is the leader of the scumbag gang. Both of these guys brought their A-game to the picture and showed they had legitimate acting chops.

Dudes really is a western movie at its core. Being that it takes place in what was modern times when it was made doesn’t really matter, as it follows the beats of that genre. Maybe there are other punk rock neo-westerns out there but I don’t think I’ve seen any others and it’s kind of a cool mix now that I’ve seen it come together.

All that being said, I dug this movie quite a bit. It was well cast, the story was decent but made better by the performances and it leaves you pretty satisfied at the end.

Catherine Mary Stewart had a massive year in 1984, between this picture and The Last Starfighter. Granted, this became more of a cult classic once it hit video store shelves unlike Starfighter, which did well in the theater and on video. In any event, Stewart was front and center in two great sci-fi films form that great year in cinema. I loved 1984 and its place in movie history and this picture is just one of many reasons why.

Night of the Comet also reunites Robert Beltran and Mary Woronov, who were two parts of the great trio from the cult classic comedy, Eating Raoul.

This is a zombie movie but it is also a teen comedy. Teen comedies were the best in the 1980s and the decade also gave us some real zombie classics. This was kind of like a perfect marriage of two genres that don’t traditionally go together. At least not back in 1984. In fact, this film would go on to inspire Joss Whedon in his creation of his most iconic character, Buffy Summers of Buffy the Vampire Slayer fame.

Catherine Mary Stewart and her onscreen sister, played by Kelli Maroney, were an awesome duo that kicked ass, carried machine guns and didn’t take any shit from anyone. Even when confronted by zombie stock boys in the mall, they never backed down. Granted, they got in over their heads, from time to time, but they survived to the end and even took out a crooked government agency in the process.

Robert Beltran was really good in this. He wasn’t the astute actor that he would become later but he was charismatic and kept the film moving forward in a lighthearted and witty way. I don’t think he gets enough credit for his contribution to this film, as most people love the two tough sisters that dominate the story.

This is a fun zombie movie and it shows a post-apocalyptic world as seen through the eyes of two teenage California girls. They compete for boys, go on shopping sprees and just want to have a good time even if 99 percent of the people around them have turned into red powder.

I love Night of the Comet. It has reached cult status but it still doesn’t get the overall recognition it deserves. It’s a film that is better than you’d expect it to be and there isn’t a whole lot one can pick apart.

“Things change. Always do. You’ll get your chance! Important thing is, when it comes, you’ve got to grab with both hands, and hold on tight!” – Otis

The Last Starfighter might not be as remembered as Star Wars and it may have been very strongly inspired by it, as most sci-fi films from the 80s were, but there is something pure and endearing about it that somehow stands the test of time. Frankly, it’s a fantastic picture and it still looks beautiful, even if its special effects are comprised of very early CGI animation.

The film is lighthearted and downright hokey, at times, but it doesn’t fell like that outdated bad sort of 80s cheesiness. It has charm and heart and there really isn’t even a character in this film that isn’t likable. Well, except for the pretty gross bounty hunter Zando-Zan. But hell, even the villains are likable to a degree.

While Star Wars was every boy’s whole world back in the time of my childhood, I can honestly say that I watched The Last Starfighter more often. It was a shorter movie than any of the Star Wars episodes and it told its story and was done. It felt complete, even if it did leave things open for a sequel that never came but should have. It was also just a good straightforward movie without a lot of extra plot and characters beyond what it needed to tell its story. You weren’t distracted by vague references to other worlds and new and strange characters walking into frame every thirty seconds. I’m not saying that those are bad things but The Last Starfighter just focuses on the task at hand and doesn’t try to universe build in order to sell books, comics and toys.

Lance Guest was a really good choice to play our hero, Alex Rogan. He felt like every all-American teenager from a tiny town that just wants to live a much larger life. Catherine Mary Stewart was a perfect compliment to Guest, as the two just had a real chemistry and made you want to root for them to make it and to have a great future.

Dan O’Herlihy was well-hidden as the alien co-pilot Grig. However, his voice is very distinct and I always knew he was the old man that ran OCP in the Robocop movies and the evil Irish madman that wanted his Halloween masks to melt the heads of children in Halloween III: Season of the Witch.

Robert Preston was the real scene stealer, though. Every time he is on screen, he commands the attention of the audience and the other actors around him. He had a very strong charisma and likability.

The themes by Craig Safan created one of my favorite film scores of the 1980s. The main theme for The Last Starfighter still holds up well today and every time I hear it, nothing but fond memories and emotions return.

The special effects are made with CGI animation but it is a much more primitive style of animation than what audiences would come to see just a few years later. While the animation is clean, it has a unique and otherworldly look to it that still feels majestic. Even if it looks dated, it still compliments the film and it still works.

The Last Starfighter was fairly popular and has a big cult following. People like Seth Rogen and Steven Spielberg tried for years to buy the rights to it, in an effort to carry on the franchise into the future. However, Jonathan R. Betuel, the writer and creator, will not allow anyone to touch it. Honestly, that’s kind of bad ass.

It isn’t a perfect movie but it still feels perfect to me. It probably deserves more recognition than it has but those who know it, love it.