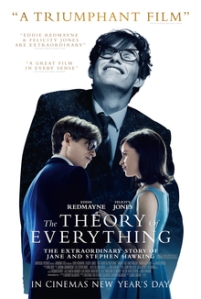 “I have loved you.” – Jane Hawking

I really wanted to see this in the theater back when it came out. I missed it but then I had it in my queue on one of the streaming services where it eventually disappeared and then fell down my memory hole. But it popped back up on something recently, so I decided to give it a watch before the opportunity passed me by again.

I’ve always been a fan of Stephen Hawking and I read A Brief History of Time back when I was in middle school and probably not fully able to grasp it. However, I’ve read it multiple times since and he’s been one of my favorite science writers alongside Carl Sagan, Neil deGrasse Tyson, Brian Greene and Michio Kaku.

The film is adapted from Jane Hawking’s book about her life alongside Stephen. While they were married and she was by his side for years, things eventually dissolved but they remained close, trusted friends despite their marriage ending and both finding love in other people.

Honestly, this is a pretty beautiful story, even if it is romanticized for a film. But it does a good job of showing how love can evolve and change over time, as people grow through life and sometimes grow apart. And sometimes one type of love can turn into a different type. I really like how this film expresses these hard truths, shows us the pain of both characters at different points but allows you to remain hopeful, as neither are bad people, they just evolve into different people with different needs. And that doesn’t mean that they have to hate one another, they can continue to love each other even after letting one another go. It’s truly sad but there is a real positive lesson and worldview within that.

The acting in this film is absolutely incredible and I’m not trying to be hyperbolic, here. Everyone in this film brought their A-game and the performances greatly enhance the end result and made this somewhat exceptional in how it handled the emotionally difficult material. Eddie Redmayne and Felicity Jones were especially great and it’s hard to not love both of them.

In stories about love dissolving and changing, it’s really hard not to paint someone as the bad guy. In that regard, this film succeeds in making you care equally for both people and what it is that each one needs.

Apart from that, this film was good in every technical area. It’s well shot, perfectly edited and paced and boasts some incredible cinematography. The score was also quite great.

Overall, I like this movie a lot. I don’t consider it a classic or anything but it achieved what it set out to do and probably exceeded it. 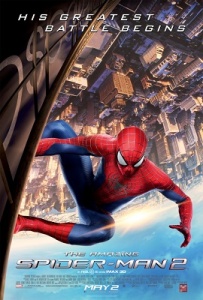 Man, where do I begin with this film? To start, it was pretty awful overall. Granted, I wasn’t a fan of the first one and I didn’t expect much from this outing but despite a few things I liked, the vast majority of The Amazing Spider-Man 2 was complete shit.

Every male actor in this film was horrible. Andrew Garfield is not all that likeable and I can’t relate to him like I did to the previous Spider-Man, Tobey Maguire. Garfield just can’t sell the “nerdy photographer” shtick all that well and most of the time he is borderline emo (I am ignoring Maguire’s fall into emo madness in Spider-Man 3 because I pretend that that film doesn’t exist).

Speaking of emo, Dane DeHaan’s Harry Osborn was atrocious. He was an emo girl’s wet dream, whining and crawling on the ground and whining some more with his burnout lizard-looking face and Dashboard Confessional haircut. I never felt threatened by this dime store wuss and his attempts at being bad ass were laughable when they weren’t just irritating. His look as Green Goblin was just goofy and ridiculous. I felt like I was watching some waify angsty morally conflicted rich kid at Comic-Con trying to dress up as Sting in Dune but doing a bad job at it.

Jamie Foxx as Max Dillon a.k.a. Electro was probably the worst performance of his illustrious career since Booty Call. The character was also unlikable and so one-dimensional that almost every piece of dialogue that was written for him was completely predictable. He may have been the stupidest smart person in the history of cinema.

Then there was Paul Giamatti as the dude who becomes Rhino, talking in the worst Russian accent I have ever heard while just being completely idiotic. I typically love Giamatti, but in this film, I felt embarrassed for him.

Weirdly, all the females in the movie were pretty good. Emma Stone was great, adorable and mesmerizing, as always, Sally Field was fantastic and Felicity Jones was good with the limited role she had. But even the strong female presences couldn’t save this pile of insipid juvenile crap.

As far as the plot goes, there was so much nonsensical bullshit that it became a complete clusterfuck and the plot was just secondary and didn’t matter all that much. The whole film was a cookie cutter superhero love story with a predictable outcome mixed in with over-the-top CGI orgasmfests that offered nothing new or captivating.

And why was it so friggin’ long?

On a positive note, it wasn’t as dull and boring as the first film in the series.

I would never say something like this carelessly; I may have a new favorite Star Wars film. Time will tell if it holds up for me but it is the closest thing to the Original Trilogy that we have seen since it ended in 1983. Also, Rogue One really just magnifies how flawed last year’s The Force Awakens is.

Rogue One is its own film. It is not a rehash of anything you’ve seen before in the Star Wars cinematic universe. It is also darker and a lot more realistic. It is the grittiest Star Wars film but it is also full of optimism, more than any of the previous pictures.

When it comes to the art of filmmaking, I would have to say that Rogue One takes the cake out of all the movies in the franchise. It’s the most beautiful Star Wars film ever made. It is also the best written and the best acted. The cinematography is beyond majestic. The score, even though it isn’t done by John Williams, is pretty fantastic. While Empire Strikes Back will probably still reign as champion, as far as the majority’s favorite movie, Rogue One is a better film. And to be completely honest, I didn’t think that was possible.

Sure, this film isn’t perfection. It has some flaws. But it has less flaws than any Star Wars film before it. And compared to The Force Awakens, this picture has some really big balls. It isn’t built with the blueprints to an old house. Also, it isn’t afraid to draw from the Prequel Trilogy, as it brings in some characters and vehicles from those films. It was actually really cool to see Disney acknowledge the prequels, as I thought they were trying to ignore them.

I don’t want to spoil it for those who haven’t seen Rogue One yet but there are several familiar faces that pop in and out of this movie. Great characters from the Original Trilogy and the Prequel Trilogy. Some of these are very iconic characters.

Before this movie, the world probably assumed that a Star Wars movie devoid of Jedi would be a boring ride. Rogue One proves that to be completely false. While the Force is mentioned heavily, there is only one actual Force user in the movie but he doesn’t even do anything until the end and it happens very quickly.

The big final battle in Rogue One is breathtaking. It reminds me a lot of some of the great battles you could have in the old Rogue Squadron games. They feature classic Rebel Alliance and Galactic Empire warships, X-wings and TIE Fighters. There are even some cool new vehicles mixed in. The planet is a pretty sight with its pristine beaches and the AT-ACT is a really cool alternate version of the iconic AT-AT from the Battle of Hoth in Empire Strikes Back.

When I wrote my review of The Force Awakens, last year, it was really long because there was so much to pick apart. I just can’t find anything to really criticize this film for. Everything about it just felt right. It gave me the experience I have craved since being disappointed with The Phantom Menace in 1999. And being that it is the best looking movie in the franchise, it gets extra kudos for that.