Published: August 1st, 2012
Written by: Larry Hama
Art by: various
Based on: G.I. Joe: A Real American Hero by Hasbro 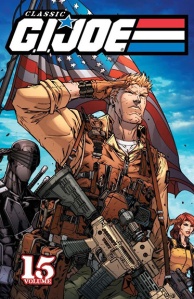 I have finally reached the end of the classic Marvel Comics G.I. Joe run, which was almost entirely written by Larry Hama.

Most of it was great but the last four or five volumes are pretty shitty, this one being no different, which is sort of sad, considering how great this franchise was in its prime, back when Larry Hama still cared about it and when Hasbro was making great toys and not corny ones that pushed fans away.

To be fair, most of the loyal G.I. Joe fans were also more into girls by the early ’90s.

Anyway, this final collection of issues is a wee bit better than the previous lot but the series still went out with a whimper.

This is also plagued by awful art that is well below Marvel’s quality standards in the ’90s.

Most of the half dozen or so artists here were trying really hard to be the next Rob Liefeld and I don’t say that complimentary. They sort of adopted the worst parts of Liefeld’s style and gave us stories littered with bad physics, weird anatomy and messed up looking faces.

All in all, I still love this series. But everything went to shit after about 100 issues and never recovered.

Published: March 21st, 2012
Written by: Larry Hama
Art by: various
Based on: G.I. Joe: A Real American Hero by Hasbro 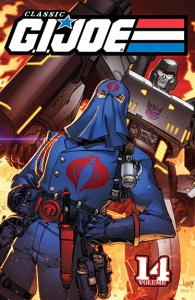 At this point, the classic Marvel G.I. Joe comic had gotten so bad that I’m pretty sure the publisher knew it. And I really hate besmirching the great Larry Hama but I really don’t think he was giving a shit about these characters anymore.

So I guess going ninja heavy wasn’t enough to keep kids interested, so this volume went ahead and threw the Transformers franchise into the mix, as well.

Now it’s been pretty well-known since the beginning, really, that both of these franchises exist in the same universe. However, how they come together and fit has always been a bit wonky and inconsistent.

In this one, Cobra helps a disheveled but vengeance seeking Megatron get his mojo back. As part of this sinister partnership, Cobra is given Cybertronian tech to give them the edge in their quest for world domination. The story featuring some of the Transformers characters is fairly short, though.

This collection of issues, the penultimate collection in the original series, features multiple story arcs. None of them are all that interesting, sadly. Even seeing Megatron and Cobra Commander working together just didn’t do enough to peak my interest and redeem the series.

I’d say that this was a bit better than the previous volume but it was still mostly bad.

Well, only one more to go. I hope Hama at least goes out with something good. Probably not, though.

Rating: 4.5/10
Pairs well with: Any of the original Marvel G.I. Joe and Transformers comics. 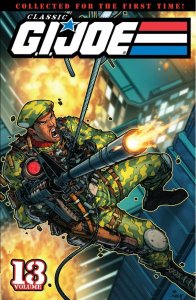 Well, we’ve reached the first collected edition of the original G.I. Joe: A Real American Hero comic series that I’ve had to give an unfavorable score to.

This series, at this point, keeps getting worse. Other than the few original characters I care about, this is littered with shitty new ones and the old ones who are there are mostly wearing really awful new costumes.

Frankly, this was hard on the eyes, the story was out of gas and this went the route of “Just throw ninjas in there! A lot of ninjas! The kids love the ninjas!”

Well, when the ninjas look more sci-fi and fluorescent than traditional and dark, a ten year-old boy isn’t going to give a shit. The ninjas are no longer cool, they look like they were designed by the same toy development team that would go on to invent Bratz dolls.

This was damn hard to get through and I say that as someone that adores G.I. Joe. Hell, it’s my favorite franchise of all-time!

Luckily, I only have two more volumes to read in the original classic run. Hopefully, this finds a way to recover and go out with a bang. I fear it’s going to go out like a wet dog fart, however.

Rating: 4.25/10
Pairs well with: Any of the original Marvel G.I. Joe and Transformers comics. 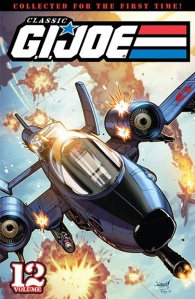 The last volume was probably where I would have jumped off the series when I was a kid, if I hadn’t jumped off of it before that due to getting older and getting strange feelings around girls.

Sadly, this collection of issues didn’t pick things back up and it just continued down a crappy path.

At this point, it’s like all the good stories have been told and the series just feels like it is running aimlessly on fumes without a clear direction. Maybe Larry Hama stopped caring and Hasbro was just making him wedge in all their new, weird toys, which, in my opinion, wrecked the franchise and killed it due to terrible redesigns and stupid, unrealistic vehicles.

With this stretch of issues, the art quality also fell off fairly significantly. While this features multiple artists, the overall quality is poor and littered with issues from bad perspective to weird faces and bizarre anatomy.

This is also longer than the previous eleven volumes by a couple of issues, which made pushing through it even harder.

But at least there were a lot of ninjas!… even if most of the new ones look really stupid.

Rating: 5.5/10
Pairs well with: Any of the original Marvel G.I. Joe and Transformers comics. 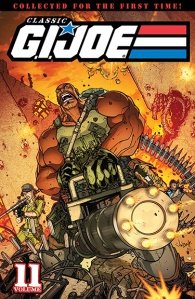 This may be where the series lost me. Granted, I think I started to feel that way a few volumes back but the series rebounded in a good way.

By this point in the long-running G.I. Joe series, though, it feels like Larry Hama is just running through the motions. Also, I feel less connected to it and less nostalgic for it, as I’ve gotten to the point in the franchise where I stopped paying attention to it when I was a kid.

That had a lot to do with getting older and with the design of the later G.I. Joe toys getting bizarre and ugly. I hated most of the new vehicles of this era, as well as the new characters and old character redesigns. Some things were good from this time but 90 percent of it was garish and impractical. I liked this when it at least felt grounded in some sort of reality.

None of that is specifically Hama’s fault. He didn’t design the toys and new character looks, so he had to make the best out of what was given to him to adapt into the larger story. Besides, this comic’s original purpose was to sell toys.

Like the other volumes I’ve reviewed, this one collects multiple story arcs. Some are fairly interesting but most of them just felt really redundant.

I did like the art, which was changing with the times but this does still generally look like an ’80s era G.I. Joe comic.

Overall, I’d say that this was my least favorite stretch of the original comic series that I’ve read so far. There are still four volumes left but I’ll probably finish the series, being that I’m this far into it.

Rating: 6.25/10
Pairs well with: Any of the original Marvel G.I. Joe and Transformers comics. 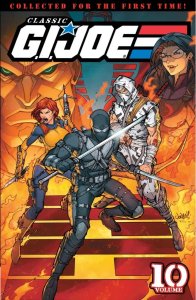 After the last volume kind of picked things up a bit, this collection really shifts things into high gear, as the original Cobra Commander returns to power and gets his revenge on those within Cobra who he deems as traitors.

This series of ten issues also features the “Snake Eyes Trilogy” storyline, which sees things drastically change for the popular ninja hero, as well as the Baroness, who has dedicated her life to destroying the man. This also changes things for Destro, as well as Storm Shadow and Scarlett.

There’s also a side plot about two of the Joes being brainwashed and under the control of Cobra.

Needless to say, a lot happens in these ten issues and there really isn’t a dull moment.

Larry Hama, even by this point, didn’t seem to tire of these stories and these characters. This caps off with the 100th issue and I have to say that Hama, over the first hundred comics, has done a stupendous job in developing these characters and making many of them feel unique and real.

The art in some of the issues here is a change up from the norm. Most of this does look consistent but other artists came in for an issue or two and altered the visual style a bit. None of it was bad but it was a bit unusual, after having read this series for so long and it having a pretty consistent look.

Ten volumes into the collected classic Marvel series and this is still one of my favorite reads out of all the comics I have picked up over the years. I never got this far when the series was current but I can see now that I truly missed out on these great, later stories.

Rating: 8.75/10
Pairs well with: Any of the original Marvel G.I. Joe and Transformers comics. 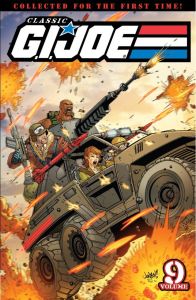 This era of the comic book lines up with the DiC era of the cartoon series. It features those versions of the character designs as well as the newer characters that came out around that time. However, while the DiC era of the cartoon was total shit, the comic book is damn solid and I wish I hadn’t checked out of G.I. Joe by this point, as a kid. Had I just been reading these stories, I probably would’ve been loyal for a bit longer, even if I had reached middle school age.

What I like about Larry Hama’s comic stories is that Cobra has different factions after the Cobra Civil War. Cobra Commander is an impostor, Zartan knows this while using the info to make the Dreadnoks influence stronger and Destro and his Iron Grenadiers are pretty much a faction separate from the main body of Cobra, who are at odds with them and G.I. Joe. There are a lot of layers and new angles to the G.I. Joe universe that make this a pretty exciting and fresh time in Hama’s legendary run on the title.

Also, this collection of issues feature the original 1960s G.I. Joe (Joe Colton) for the first time in this continuity. This would kind of open the doors for that character to be used somewhat frequently, as he has been used multiple times in the comics and even appeared in the second live action movie, played by Bruce Willis.

This collection probably also introduces the most major changes in the series. It debuts the Battle Force 2000 team, Python Patrol and introduced Darklon, who I never knew was Destro’s cousin, and his army. This also sees power shifts happen in Cobra that will help set the stage in a post-Cobra Civil War world.

I dug the hell out of this volume and I honestly assumed that the series would start suffering from redundancy and Larry Hama possibly getting bored with the material. I was pleasantly surprised to see that this wasn’t the case.

Rating: 8.5/10
Pairs well with: Any of the original Marvel G.I. Joe and Transformers comics.