These three films differ from the first four in the series in that they are missing the character of Sgt. Carey Mahoney. Steve Guttenberg left the series and thus, took the main character with him. For the first two films post-Mahoney, we got a new lead actor played by Matt McCoy. Now McCoy is a decent enough actor but he is a straight laced kind of guy and not a great funnyman like Guttenberg. 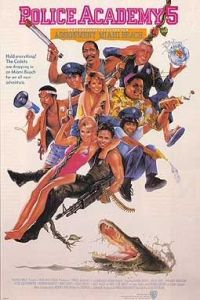 This is the first Police Academy film to take our characters out of their familiar setting. Since it is the fifth film, the producers were probably out of ideas and wanted to turn the fifth film’s production into more of a vacation.

Audiences weren’t happy going into a film without Mahoney, as the focal point, but what made all of these films work was the ensemble cast. Now without Mahoney, the spotlight was a little bit brighter on his cast mates. Hightower, Tackleberry, Jones, Hooks, Callahan, Harris, Proctor, Commandant Lassard and House all had more to do in this movie. I like this film because it expands on them and lets them continue on with these great characters.

Sure, the film is a step below the previous ones but it isn’t as bad as critics and IMDb would make you believe. If you are a fan of the series up until this point, you should still like this installment.

The Capt. Harris and Proctor bits in this film are some of the best of the series. The action sequences are also well done, as they take to the Everglades on airboats in an effort to chase down the villain. And the villain, who is played by René Auberjonois, is my favorite bad guy in the film series. It may also be my favorite Auberjonois role after his parts on Star Trek: Deep Space Nine and Benson. 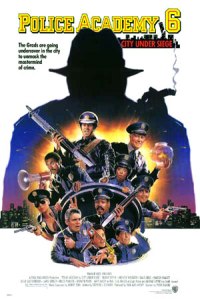 The sixth film isn’t very good. It has some redeeming things about it, as the cast of familiar characters are there once again, providing the audience with laughs. Watching this though, you could tell that the creative staff were out of material and out of jokes.

This was the first film in the series to play like a whodunit mystery but that felt out of place in a series where the movies were a series of random comedy gags with just a bit of plot sprinkled in to string it all together.

The villains were the cheesiest of the series, the big mystery reveal at the end was awful and the actors didn’t even look like they were having fun anymore and instead realized that if they wanted to keep making a paycheck, they were stuck churning out Police Academy films annually.

When this movie ended, so did the schedule of having a new Police Academy film each spring. In fact, for a long time, I thought this was the end of the series. It should have been. But then five years later, someone thought it’d be a good idea to do a seventh film. 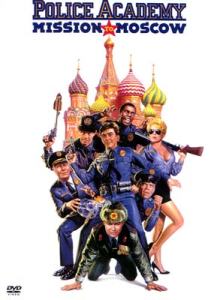 “Everything about me… is real.” – Callahan

This film is easily one of the worst movies that I have ever seen. It pains me, considering that it still has some of those characters I love. But at this point, they have become absurd cartoon characters.

The director of this film is an idiot. For whatever reason, he must be really into acrobatics because there was a lot of characters jumping around doing bizarre flips throughout the film. It made no sense and it was, for lack of a better set of words, fucking stupid.

There were also sound effects that didn’t fit and were bizarre as hell.

Additionally, the camera was often times zoomed in way too close to the actors’ faces. It was disorienting and visually annoying.

This film features the talents of the legendary Christopher Lee and the bad ass Ron Perlman. I feel sorry for them for having even been anywhere near this picture. Also, Claire Forlani is in this for some reason.

You would do yourself a huge favor by steering clear of this film at all costs.

As a kid, no comedies brought me as much replayable joy as the Police Academy films. Yes, they are cheesy and the humor is crude and low brow with slapstick thrown in but to a kid in the 1980s, that is what I liked. And it may have been the first film where I saw boobs.

Still to this day, I enjoy it. And even though this comedy method is generally used poorly in most modern films, it worked in these movies and for the time they were current.

This series spawned a new movie every spring from 1984 through 1989 and then gave us an unwatchable seventh film in 1994. Up until the end though, this was a great series. I’m not sure how new audiences would take to them today but from 1984 to 1989, the Police Academy franchise was adored by fans even if it was generally panned by critics. 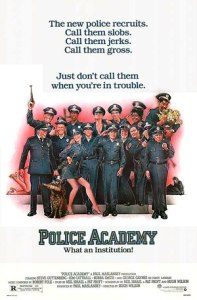 The first film in the series introduces us to many of the characters we will see over the course of several films. Most importantly, this movie gave the world the comedic talents of Steve Guttenberg. Guttenberg’s Sgt. Carey Mahoney would be the central character of these films over the first four installments.

We also got to meet Michael Winslow’s Larvell Jones, Bubba Smith’s Moses Hightower, David Graf’s Eugene Tackleberry, Leslie Easterbrook’s Sgt. Callahan, Marion Ramsey’s Sgt. Hooks, G.W. Bailey’s Lt. Harris and George Gaynes’ iconic Commandant Eric Lassard. Other major characters would come in other films but these characters lasted over most of the series and each one of them are memorable and lovable in their own way. The Police Academy series is an example of large ensemble comedies done right.

This film in the series had the most overall narrative and is considered by most to be the best film. Later films in the series were full of long-running jokes chaining back to this film, as well as being structured by a series of gags and funny bits that were only lightly threaded together by an actual plot. This one was an adult comedy, full of a large cast of kooky characters – in many ways it was similar in style to Slap Shot, Caddyshack and in some regards, MASH. The great use of this formula in Police Academy also inspired a slew of knock-off films throughout the mid 80s.

The plot is about a bunch of screw ups who join the Police Academy after the mayor declares that anyone can join the academy and be given a fair shot. It concludes with a sequence that sees these screw ups go into the field with minimal training and finding themselves in the middle of a downtown riot.

As stupid and absurd as this film can be, it does create a solid sense of camaraderie among the characters. You care about them, their relationships with one another and the crazy situations they find themselves in. This is why this movie became a hit and why this series lasted for seven pictures. You wanted to see more of these people and their antics.

Police Academy was a huge hit at the time and deservedly so. Each subsequent film dropped of a bit in success but they all still did pretty well through the 80s. 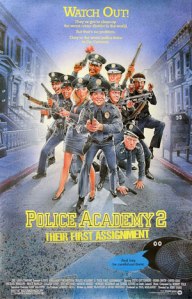 In this one, we see our beloved officers take their first job at a precinct ran by Howard Hesseman’s Pete Lassard, younger brother to Commandant Lassard. Also, Lt. Harris is replaced as the main antagonist by Art Metrano’s Lt. Mauser. This creates a lot of debate between Police Academy fans as to who was the better series antagonist: Harris or Mauser. I will say that they are both awesome.

We are also introduced to Lance Kinsey’s Lt. Proctor, who went on to become one of the funniest and most iconic idiots in cinema history. This is also the first of three films featuring Bobcat Goldthwait as Zed and Tim Kazurinsky as Sweetchuck. Zed is the big villain of the film and he is fantastic. He is also Goldthwait’s most recognizable character and plays much better as a goofy bad guy in this film than as a cop in the later ones.

This movie is still a great continuation of the Police Academy series and expands on the characters enough to where you enjoy seeing them growing up and taking on new roles.

Also, the big finale at the abandoned zoo was really cool. It was an awesome location for the gang’s hideout. 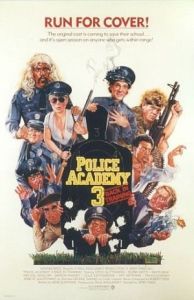 “Mahoney must think he’s as dumb as we are.” – Captain Proctor

The third film rehashes the formula of the first Police Academy but doesn’t do it as well.

Here we have a new class of cadets joining the academy but now the cadets from the original film are there to train them. It is a passing of the torch to a new generation but the new generation didn’t give us many new characters to sink our teeth into. Zed and Sweetchuck return and become cops in this one but they are the brightest spot by far of the new cast of recruits.

The film is still funny, it employs a lot of the same gags and it ends with a pretty decent water action sequence for a film that is a low budget 80s comedy.

The main plot focuses on two academies going head-to-head in a competition, as the worst of the two is going to be shutdown due to budget cuts. The evil academy is ran by Mauser from the previous film. Mauser and Proctor, when together, are comedy gold. 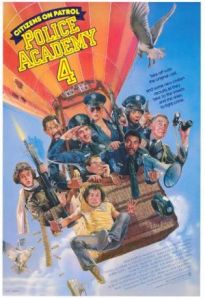 “Don’t touch those! Don’t you ever touch my balls without asking!” – Captain Harris

In an effort to not completely redo the plots of the first and third movie, this film sees Commandant Lassard start a new program that allows citizens to train at the academy with real police officers in an effort to build up a better relationship with the community. Essentially, it is a rehash of the first and third films but the little twist makes it a bit more interesting.

Billie Bird steals the show here as the elderly Mrs. Feldman. She is a tough as nails, take no shit, bad ass old lady that is the perfect compliment to the big gun-toting maniac that is Sgt. Tackleberry.

Sharon Stone is in this film too but you’ll barely notice. You can also enjoy the small roles played by a young David Spade, Brian Backer and a “blink and you’ll miss it” cameo by Tony Hawk.

Also, due to a bad back injury that Art Metrano suffered, Mauser was out of the picture and G.W. Bailey’s Capt. Harris was brought back as the antagonist of the series. Harris and Proctor together were even better than Mauser and Proctor in the two previous films.

The gags are great, the pranks are awesome and this film embodies the spirit of the installments before it. Unfortunately, it is the last film to star Steve Guttenberg and a drop off in quality over the course of the next three films was a result. We also lost Goldthwait and Kazurinsky after this chapter in the series and they were definitely missed.

The highlight of this movie is the big action sequence at the end, which featured biplanes, hot air balloons and a whole lot of mayhem.