“Hey it is our basic human right to be fuck ups. This civilization was founded on fuck ups and you know what? That makes me proud!” – Gary King

When I first saw this movie, I was fairly disappointed by it and I remember many others being as well. However, I think my initial assessment of it was faulty, as its actually not a bad film and after having nearly eight years to digest it and reflect on it, I thought that maybe I needed to give it another go, knowing what I was getting into this time.

So seeing it now was actually kind of refreshing. I had forgotten a great deal of the film and its story. Sure, I remembered the gist of it, as well as the ending but I hadn’t retained all of the context and nuance. And now that I’ve re-experienced it, I think that I just wasn’t in the right headspace or hadn’t experienced enough of life to find things in it that resonated so deeply in the way they do now.

The thing is, the power trio of Edgar Wright, Simon Pegg and Nick Frost are all about 5-10 years older than me. Well, seeing this somewhere within 5-10 years after its release, makes me roughly the same age that they were when they made it. Why’s that important? I’ll explain.

The main thing is that the film deals with guys approaching the midway point of life and thus, right at the age that the midlife crisis stage can begin in many males. Now that I’ve also reached this point, I can relate to how one character in particular is obsessed with the greatest night of his life, which came in his youth, and how his future then was a clean slate for him to do anything but now, years later, life hasn’t panned out as greatly as he had anticipated or hoped. I think everyone has these thoughts around 40 or so but some people can take it to the extreme.

Additionally, this same character, you find out late into the film, recently tried to commit suicide and was dealing with massive depression caused by the immense weight of his own disappointment in himself. Depression at that level is something I have dealt with for my entire life and I’ve had friends who were even worse off and have taken their lives. Two of them hit me really hard in the last few years. But having now lived through that in my own life makes the emotional parts of this film much more real and gut punching. Luckily, I’ve mostly overcome my issues in the last few years.

While I can sympathize with Simon Pegg’s Gary and understand his issue first hand, I feel like I more closely relate to Nick Frost’s Andy, as the guy who realizes the pain his best friend has been in and feels immense guilt for not being there for him. I think that’s something that all good people feel when they’ve lost a friend or a loved one to suicide.

Now mixed in with all that emotional stuff that I didn’t appreciate as deeply as I do now, we have the larger group of friends, who also have to try and work out their issues with each other. And then on top of that, we have a pub crawl marathon in a small quaint town that has seen its citizens replaced by manufactured shells controlled by a high-tech alien species who have been secretly invading and assimilating the planet for quite awhile.

So there’s a lot in this movie to take in but it’s really well-balanced between the real human drama and the really awesome sci-fi action plot. And frankly, the plot is pretty cool, as are the special effects and the solid soundtrack that may be Edgar Wright’s best in how he used it throughout the film to set the tone and to properly generate the right level of nostalgia.

Additionally, the acting in this is the best out of the three films in the Three Flavours Cornetto Trilogy. By this, the third film, these guys are just so perfect together and the surrounding cast is full of many people who have worked with these guys multiple times that they all just feel like an onscreen family. To put it simply, everyone has great chemistry but the bond between Pegg and Frost has never been stronger than it is here. I’d also say that this is Nick Frost’s greatest performance, as he actually was the more serious character for the first time and with that, had to help uplift his broken friend and become the real hero of the story.

Still, this is my least favorite film in the trilogy. But that’s like saying oral is your least favorite type of sex. In the end, it’s still really fucking good.

Rating: 8.25/10
Pairs well with: other Edgar Wright comedies, as well as his television show Spaced. 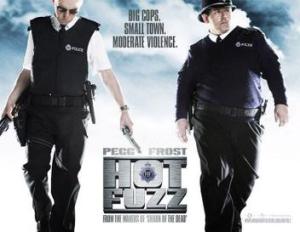 “I may not be a man of God, Reverend, but I know right and I know wrong and I have the good grace to know which is which.” – Nicholas Angel, “Oh, fuck off, grasshopper. [Reverend Shooter pulls out a pair of derringers from his cassock]” – Reverend Philip Shooter

The moment this movie finished in the theater, I had a massive smile on my face and it stuck with me for days. Once it was gone, I went back to the theater to go see this picture again.

This is still my favorite Edgar Wright movie and revisiting it now just solidified that. For what it is, it is pretty close to perfect.

It features Simon Pegg and Nick Frost at their absolute best, as a duo. After two seasons of the television show Spaced and 2004’s cult classic Shaun of the Dead, these two guys had evolved into a perfect pair, where each half compliments the other and together they make a much better whole.

That being said, if there was ever a film from Edgar Wright’s Three Flavours Cornetto Trilogy that deserved a sequel, it’s this one. I doubt it will get a sequel but it perfectly represents the buddy cop genre and those films are perfect for sequelization. Just look at Lethal Weapon, Bad Boys, Rush Hour, etc.

Anyway, this is just great from top-to-bottom. It has a stacked cast featuring several of my favorite British people, it has a solid, surprising story, superb action sequences and the sort of buddy cop camaraderie that you and your primary school homies used to try and emulate while playing cops on the playground.

Despite all the other great things Pegg and Frost have done, this feels like the roles they were born to play. And honestly, I almost feel the same way about Timothy Dalton in this, as he’s so damn good that he’s perfect.

Hot Fuzz is just a hilarious, balls out action flick. Once you get to the action packed finale, things escalate in ways you’d never expect and at the same time, this never jumps the shark. It just has the perfect balance of comedy, action and ridiculousness.

Not only is this my favorite of Wright’s films, it is also one of my favorite movies of its decade.

Rating: 9.25/10
Pairs well with: other Edgar Wright comedies, as well as his television show Spaced.