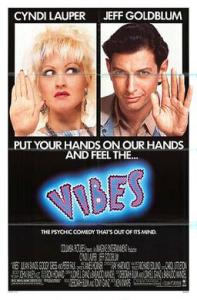 “I’d give you the finger but I’m too refined.” – Sylvia Pickel

I was nine years-old when this hit theaters but I remember seeing the ads on television constantly. I never did see the movie in the theater or thereafter until now, over three decades later.

I generally like Cyndi Lauper but I haven’t seen her act in anything else. In this, she’s not great by any stretch but she’s at least likable and entertaining. Then again, she’s pretty much playing herself with psychic powers.

Beyond Lauper, you have Jeff Goldblum, who I love in everything he’s ever done. He’s good here but he also plays a character that’s pretty much just himself with psychic powers. So neither lead in this movie really had to try too hard.

You also get Peter Falk, Julian Sands, Michael Lerner, Park Overall from Empty Nest and a very young Steve Buscemi in this.

I guess out of everyone, I enjoyed Falk the most.

The plot is pretty damn rickety and it’s not very good. Although, it is somewhat salvaged by the charm of the Lauper and Goldblum, who I thought had fairly decent and unique chemistry.

Vibes just barely kept my attention, though. I didn’t find it tough to get through but had it lasted longer than its 99 minutes, I would’ve probably needed to take a break.

In the end, this is pretty forgettable and I can see why it’s been lost to time and never really gained a cult following, even from the many fans of Cyndi Lauper’s that still exist today.