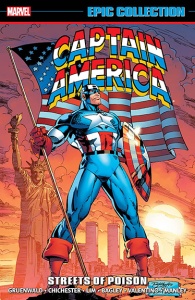 I really liked the Streets of Poison storyline when I was a kid. I was also really pumped to jump right into this Epic Collection, as the previous one was pretty exceptional.

However, this didn’t read as good as it did when I was eleven years-old but lots of things don’t and that also doesn’t mean this was bad.

I like this era of Captain America and revisiting it makes me appreciate it even more, even if it’s not as perfect as I remembered it.

This kicks off with the Streets of Poison arc, which is highlighted by a fight between Red Skull and the Kingpin. I thought that this rivalry between the two villains and everything leading up to their fight was really solid. You had Crossbones trying to take out Kingpin with Bullseye trying to take out Red Skull and the two assassins having their own fight. Additionally, Captain America fights both of them as well.

My only real gripe about the story was how being exposed to drugs altered Cap’s behavior pretty immensely. It bonded with the super solider serum in his body and the only way to cure Cap was to remove his blood and fix the serum. However, Cap, being strongly anti-drug after this experience, rejected the serum and decided to move forward as a normal man and not the creation of a drug he took back in the 1940s.

Following Streets of Poison, we got the story of the Serpent Society abducting Diamondback and trying her for her crimes against the Society. King Cobra and his minions rule against Diamondback harshly but she survives her execution when Cap finds her. Diamondback’s allies within the Serpent Society leave the group as well and they start to establish themselves as a new heroic group.

There are a couple single issue stories weaved into the bigger tapestry, here. None of them were bad and they honestly just showed how solid the writing at Marvel was in this era. 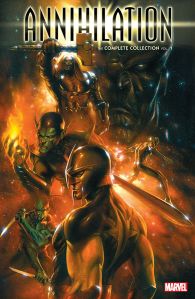 I’ve wanted to read Annihilation for a long time. The thing is, it’s absolutely f’n massive! Also, the collections for it back in the day were pretty expensive. But it was a long story that stretched over two years and across multiple titles.

I love most things that are cosmic Marvel though, so I felt that it was time to delve in. Plus, I took advantage of a big sale on Comixology and got all of them for about $16.

To start, the art is pretty stellar throughout the event. I especially loved the parts that were done by Mitch Breitweiser.

In addition to that, the writing was good when you break it apart and look at each miniseries within the crossover mega series.

But the hugeness of this kind of wears on you by the time you get closer to the end. There is just so much here and the story is organized in a way where you jump to a big four issue arc about one set of characters and then you go to the next four issue arc. Eventually, it all comes together at the end but some of the miniseries within the mega series felt inconsistent in overall quality.

This had some hiccups and lulls throughout but the end result was still enjoyable and this event had some incredible moments. Seeing Galactus defeated, captured and being farmed for energy was pretty breathtaking, shocking and a game changer for the plot and the story’s threat level.

Annihilus is one of the greatest villains in Marvel Comics history and seeing him basically be a god here was damn cool. Hell, seeing Thanos being forced to play Annihilus’ game was another epic narrative shock.

Ultimately, this series was massive in size, massive in scale and was one of the most grandiose tales Marvel has ever told. If you dig the cosmic stuff, you really should give this a read.

Rating: 7.25/10
Pairs well with: other big Marvel event stuff but mostly those that spend most of their time in the cosmos.

This is one of those iconic stories that you hear about all the time in comic book circles. However, I thought that the whole thing was pretty damn underwhelming for what it has been built up as.

The Avengers team gets ripped apart. It is due to the betrayal of one of their own. They don’t know that at first and when confronted with the idea, reject it.

However, the Scarlet Witch has basically gone batshit and blames all of her friends for killing her children that were never actually real to begin with but a psychotic projection of the Scarlet Witch’s will.

Yeah, does this story sound stupid to you? Because it definitely felt stupid to me. I thought Bendis was a big deal but everything I read by him is just as batshit as the Scarlet Witch, Wanda’s fucked up brain in this story. I’ve just never been too keen on Bendis, other than his earliest work on the Miles Morales Spider-Man stuff. His Superman stories, his current job, are also just some weird ass shit.

I don’t know, this book hurt my head. It’s only saving grace was superb art from David Finch and awesome action sequences.

Also, this leads into the big Civil War event that effected all Marvel titles, as well as the major X-Men events: The House of M and The Messiah Complex.

Avengers Disassembled has been talked about fondly for years by many. I’m just glad that this was only 133 pages.

Rating: 5.5/10
Pairs well with: This leads into the massive X-Men stories The House of M and The Messiah Complex, also it has ramifications that carry over on the Avengers side of things and into the Civil War event.