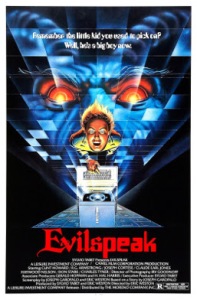 “I command you, Prince of Evil, heed my call. Give life to the instruments of my retribution.” – Stanley Coopersmith

Evilspeak is a cool movie that capitalized on two things that had people worried in the early ’80s: the “Satanic panic” the media and parents groups were raging about, as well as the emergence of personal computers and what such a jump in technology could mean for the common folk.

This also stars a very young Clint Howard, playing a teen in a military school that decides to use his computer to summon the devil in an effort to conquer his bullies.

It’s also neat seeing the bully being played by a young Don Stark, who is probably most famous for being the doofus neighbor to Red Foreman on That ’70s Show.

The movie also features legendary, badass character actor R.G. Armstrong, as well as Richard Moll, before he’d go on to greater heights as Bull on the ’80s sitcom Night Court. There’s also Lenny Montana, a former professional wrestler that was most known for playing Luca Brasi in The Godfather and another sitcom star, Haywood Nelson, who was already known for his role as Dwayne on What’s Happening!! and later, What’s Happening Now!!

Man, I dig the hell out of this movie. It’s not just because I love the cast, it’s because this is just a time capsule into a really cool era for horror cinema. Also, it’s not a slasher flick or haunted house movie. Frankly, it’s pretty unique, at least for its time.

Granted, it’s concept would be ripped off and reimagined in several other films but this is the first film I know of where a personal computer was used to create a black mass and call forth the Devil.

Clint Howard really shines here because even if he succumbs to evil and a fucked up revenge plot, you still sympathize with him, as he just has this sort of soft, sad, endearing quality as this character, Stanley. His life sucks, it’s tough as hell and his bully is a real piece of shit. That being said, what the bully does to Stanley’s puppy is unforgivable and as a viewer, you want Stanley to literally raise hell.

I thought that the special effects in this were also pretty great. The big finale was well shot and employed some cool techniques, as a levitating, demonically possessed Stanley unleashes his newfound power on the assholes who tormented him.

Beyond that, I also thought the locations, sets and general visual tone were perfect. The film’s score wasn’t too bad either.

Evilspeak is one of those early ’80s horror movies that seems like it’s mostly forgotten today. However, it’s concept has lived on in countless other things throughout pop culture. 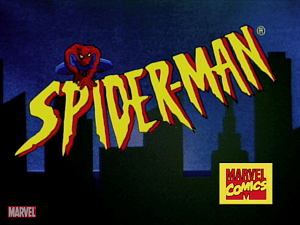 After the success of the early ’90s X-Men cartoon on Fox, it was natural for the network to ask for more Marvel properties to adapt for their Saturday morning audience. The Spider-Man series was the longest running and most successful of these animated spinoffs.

While the X-Men show still stands as my favorite of these animated Marvel series, Spider-Man is a very, very close second and nearly as good.

The stories are generally well written and even if they have to take some liberties and alter the plots from the comics. This was due to time constraints and by trying to wedge in the debut of Venom really early in the series, which changes the overall timeline of events in Spider-Man’s life, greatly. Also, the showrunners probably wanted to get as many villains added into the mix, early on, so that each new episode felt fresh.

Spider-Man has a massive rogues gallery and this show utilized the core villains really damn well.

The tone of the cartoon is pretty perfect. Sure, there are cheesy and hokey bits in every episode because this is a kid’s cartoon but it does stay pretty true to the tone and style of the source material. Most importantly, it’s true to the characters and the writers obviously knew the Spider-Man mythos well.

I love this show and it’s still fun to have minimarathons of episodes. Honestly, to me, it’s one of the highlights of Disney+.

Rating: 8.25/10
Pairs well with: the other animated Marvel television series from the ’90s. 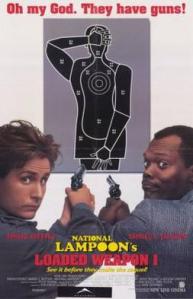 “Nice weather? You think we’re having… nice weather? I guess you didn’t lose the only one that meant anything in your life. I guess you don’t feel burned out by the human misery and despair perpetrated by the criminal vermin that infest every pore of this decaying city, forcing you to guzzle cheap wine and cheaper whiskey to dull the pain that shatters your heart, rips at your soul, and keeps your days forever gray. What flavor Icee you got today?” – Colt

Regular readers of this site probably already know that I’m not a big fan of parody movies outside of Mel Brooks’ work. However, ever now and again, I discover a parody film that is actually quite good.

I never saw National Lampoon’s Loaded Weapon 1 because I didn’t have much interest, even when it came out in 1993 and I was a huge Lethal Weapon fan. These films tend to be predictable, lame and lowest common denominator humor. While this is pretty low brow and a bit predictable, it wasn’t lame and it was actually really well done and executed.

I think this stands above other films like it because it has a really solid cast with several heavy-hitters that just commit to the material so convincingly, it makes everything work. You buy into the goofy jokes and the absurdity of it all and frankly, Emilio Estevez and Samuel L. Jackson had good chemistry. I wouldn’t say that it was on the level of Mel Gibson and Danny Glover but they played off of each other nicely and looked like they were having a blast playing these characters.

WIlliam Shatner and Tim Curry were both enjoyable as villain characters. Shatner went into this with no fucks given and it just made his performance that much more entertaining. I loved his accent, his facial expressions and the guy isn’t just a sci-fi legend, he’s a master of comedic timing.

This ridiculous film is just a lot of fun. If you like buddy action films and have a sense of humor, you’ll probably dig this.

Rating: 6.75/10
Pairs well with: the Lethal Weapon films and the dozen other movies this parodies, as well as other parody films of the time. 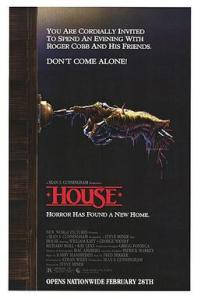 “Hey, it’s great to have a new neighbor. Woman lived here before you was nuts. Biggest bitch under the sun. Just a senile old hag really. Wouldn’t be surprised if someone just got fed up and offed her. Know what I mean?” – Harold, “She was my aunt.” – Roger, “Heart of gold though. Just uh, a saint really. And uh such a beautiful woman, for her age.” – Harold

I never liked this movie. In fact, I remember not being alone in that based off of what other people said about both House films when I was a kid. But in the last few years, I’ve heard people talk it up like it’s a classic or a hidden gem. Being that I hadn’t watched it since the mid-’80s, I wondered if I had missed something as a kid. Was it maybe too adult for my eight year-old sensibilities?

The short answer is “no”.

I still think that this is a pretty bad movie. The main reason is because it is dreadfully dull.

This is like a family friendly horror movie of the worst caliber. It’s like a terrible episode of Amazing Stories and then it’s even worse than that.

The story doesn’t make a whole lot of sense, it’s really just a total fucking mess and it is hard to care about any of the characters because you can’t take any of this seriously enough to connect to anything.

Sure, this has some good comedic actors with William Katt, George Wendt and Richard Moll. Their talents are mostly wasted though. Katt is a wee bit charming but he’s too goofy and thus, it’s hard to sympathize with his turmoil. Wendt has some funny lines but he’s not in the film all that much and he’s sort of just on the sidelines. Moll wasn’t used in a comedic way at all and it’s such a departure from the Moll audiences would have been used to due to his time on Night Court. In fact, I wonder why the cast him in the first place.

The special effects are pretty hokey, even for 1985. Although, I was impressed by some of the matte painting work.

In the end, I still think this movie sucks. I’ll probably watch the second one in order to review it but I’m not enthused about it.

Rating: 4.25/10
Pairs well with: its sequel and other films that Italy merged into a series of unrelated pictures called La Casa. 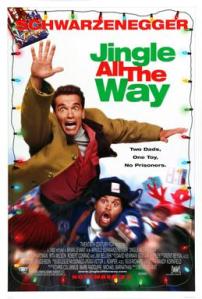 “We get one day a year to prove we’re not screw-ups, and what do we do? We screw it up.” – Myron Larabee

I never saw this movie in its entirety until Christmas Day, 2018.

When it came out in 1996, I thought it looked terrible. I was also a senior in high school and going out with girls was more important than watching bad movies with Arnie, Sinbad and young Anakin Skywalker crying over a lame toy.

Since I have exhausted so many Christmas classics, I figured that I’d give this a chance. Besides, I actually love Arnie, Sinbad and the great Phil Hartman. Plus, this also has small roles for Curtis Armstrong (Booger from Revenge of the Nerds), Martin Mull, Jim Belushi, Richard Moll (Bull from Night Court), Mickey Rooney, Robert Conrad, Mo Collins and “The Big Show” Paul Wight.

So if I’m being honest, which I always am, I was surprised by how much I enjoyed this stupid movie. It’s a lot of fun, there isn’t a dull moment and the chemistry between Schwarzenegger and Sinbad is really good. I actually just wish that they would’ve shared more scenes together.

The rest of the cast also did well and the rivalry between Arnold and Phil Hartman was entertaining. Man, Hartman was great as a neighbor creeper moving in on Arnold’s wife but in all seriously, was he insane? Arnie’s the f’n Terminator!

The only big problem with the movie is that it all falls apart in the finale. I was on board and digging everything up until the parade where Arnold and Sinbad are dressed up like a superhero and a supervillain and Arnold actually has a functioning jetpack. I know that this is a dumb, mindless movie but watching Arnold fly around downtown without proper jetpack training, moving in a way that isn’t possible by physics, made it so that I couldn’t suspend disbelief any longer. It was total cringe and destroyed the fun movie that this was before that shoddy action sequence kicked off.

Ignoring that atrocious ending, I probably would have given this about a 7.25. Seriously, I enjoyed it that much for 90 percent of the movie.

Still, I’d watch this again but probably not for several years once I’ve run through a few dozen other holiday films.

Plus, the cast keeps things pretty engaging for the most part and the reindeer fight was the stuff of legend.

Rating: 6.25/10
Pairs well with: other Schwarzenegger comedies: Kindergarten Cop, Twins and I guess Junior but no one should suffer through that one.