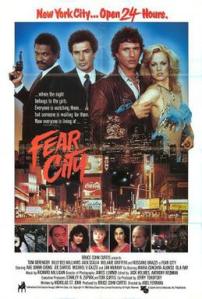 “[as Rossi drives off] There’s nothing I hate more than guineas in Cadillacs.” – Al Wheeler

I never saw this film but man, it was pretty damn cool. But when it stars Tom Berenger and Billy Dee Williams as two badasses at odds but hunting the same scumbag, why wouldn’t it be pretty damn cool?

It also stars Melanie Griffith during the best era of her career, just before things took off for her. The reason I like this era for her is that she did a lot of really cool flicks between this, Brian De Palma’s Body Double and the dystopian cyberpunk delight, Cherry 2000.

Griffith plays a stripper being hunted by a slasher type serial killer but she’s also joined by other good up-and-coming actresses also playing her stripper pals. Alongside her we get to see Rae Dawn Chong and Maria Conchita Alonso, two women that would go on to have a pretty good run throughout the ’80s and into the early ’90s.

At it’s core, this is a slasher flick. However, it’s not really a horror movie, as much as it is a crime thriller. It’s directed by Abel Ferrara, who previously directed the cult classic Driller Killer but would later go on to do The King of New York and Bad Lieutenant. This movie actually feels like a natural bridge between his gore littered slasher flick and his more serious crime dramas. Honestly, it mixes the best of both worlds and in my opinion, is probably Ferrara’s best movie even though most people have slept on it – myself included, until now.

If I’m being completely honest, I’ve actually never been a big fan of Ferrara’s work but this film is pretty solid. Granted, I need to revisit The King of New York, as it’s been a few decades since I’ve seen it.

Fear City is just energetic, provocative and ballsy. That’s what I love about it. It’s similar to the tone of a lot of the action movies that Cannon Films was putting out in the ’80s. It has that unapologetic grittiness to it with just a thick layer of cool.

I wish Abel Ferrara had made more movies like this.

“It’s all right. Listen, listen. I know everything now. The Latin you saw in that book was an ancient warning from the angel Gabriel to the angel Uriel.” – Michael Lerman

The Sentinel came out in a decade that was packed full of religious themed horror movies after the successes that were 1968’s Rosemary’s Baby and 1973’s The Exorcist. So it’s easy to see why it may have gotten lost in the shuffle. However, in my opinion, it is one of the better ones out there.

The film also has a really great cast, even if most of the parts are fairly small, except for the two leads: Cristina Raines and Chris Sarandon. Sprinkled throughout though are Martin Balsam, John Carradine, José Ferrer, Ava Gardner, Burgess Meredith, Sylvia Miles, Eli Wallach, Christopher Walken, Jerry Orbach, Beverly D’Angelo, Nana Visitor (of Star Trek: Deep Space Nine), Tom Berenger, William Hickey and Jeff Goldblum. Needless to say, there’s a lot of great talent here and the film truly benefits from it, as just about every scene includes someone of note and none of them are simply dialing in their performance.

The plot revolves around a young woman with a pretty screwed up past, wanting to live on her own for awhile. She moves into an old building near the water in New York City. However, the attic apartment has an old blind priest that just sits in the window 24/7. The place is also full of bizarre residents and as the film rolls on, we come to learn that these people are ghosts. We also learn that the building is a gateway to Hell and the old priest sits there to keep the evil from escaping the walls of the house.

I like how the story evolves and brings in the detectives played by Eli Wallach and Christopher Walken. I like both of those actors tremendously and they were great together in this. In fact, I kind of wished they had their own film as two NYC detectives in the gritty ’70s.

The real scene stealer for me was Chris Sarandon. I’ve loved the guy since I first saw him in Fright Night when I was a little kid. He’s just solid in this and I like what they do with his character over the progression of the story.

I was definitely pleasantly surprised by this movie. I’ve known about it for years but never got around to seeing it. Had I known how many great actors were in this, I probably would’ve watched it years earlier.

“What is the most resilient parasite? Bacteria? A virus? An intestinal worm? An idea. Resilient… highly contagious. Once an idea has taken hold of the brain it’s almost impossible to eradicate. An idea that is fully formed – fully understood – that sticks; right in there somewhere.” – Cobb

Like Christopher Nolan’s Interstellar, I guess I’m the only person on Earth that doesn’t like this movie.

I can’t take away from the visuals though. This film is stunning to look at and all the strange physics of the dream world come off almost flawlessly and create a visual smorgasbord of cool shit. And because of that, this film had one of the most amazing trailers for its time.

Frankly, I think a lot of people were so blown away by the trailer and the visuals that they completely dismiss everything else.

Inception is one of those “science-y” word salad movies that no one wants to look uncool by admitting that they have no idea what the fuck any of this is about.

The film relies solely on you buying into Christopher Nolan’s bad science, which is constantly explained with more and more layers dropped on top of it all. I don’t think that Nolan really knows what the hell he was saying. It’s complicated, it’s boring, it’s really fucking lame and it’s only cool for those people that read I Fucking Love Science‘s Facebook feed for the headlines without clicking on the articles. It’s bullshit brain casserole for the normie that yells “Yay, science!” but hasn’t actually picked up and read a book by Neil DeGrasse Tyson, whose books are actually really easy for the layman to digest.

This movie wants so hard to be smart but it’s dumber than my cousin Sam after we found her under a bridge in Ft. Lauderdale following a twenty-six day opium bender.

On the flip side, the acting is top notch. I can’t fault the cast for anything. Well, except for Ellen Page who is dryer than a box of saltine crackers, opened and lost in the Sahara during a drought. However, good acting aside, every character in this movie is flat. Also, it lacks any sort of emotion because of the flatness of these characters and because the audience is hit in the face with “Yay, science!” every 8 seconds that you don’t have time to make a connection with anything.

Also, Nolan’s directing is damn good. It’s just his writing that is terrible with this $160 million bullshit bonanza.

Fuck this movie. I hate it. I can’t give it a very low score because of the strong positives. But I can’t sit through this turkey in one sitting. I’ve tried. Watching it again, just to finally review it was like sitting through a four day root canal without drugs.

As for that ending, was DiCaprio dreaming? Who the fuck cares.

The MLB Network recently aired a short documentary about the life of Bob Uecker, as told by him and his friends and colleagues.

For those who don’t know, Bob is the funniest guy in the history of baseball. He wasn’t a great player but he went on to be a great broadcaster and had a good career beyond that, starring in films like Major League and the awesome ’80s sitcom Mr. Belevedere. As a kid, I also remember him showing up in the WWF (now WWE) to add a little flare to their broadcasting staff during Wrestlemania events. He was always funny and always entertaining.

The documentary pretty much interviews Mr. Uecker, Bob Costas, Al Michaels and others who have known Bob well over the years. It covers his baseball career, his broadcasting career and everything else. It even showcases his hilarious appearances on The Tonight Show with Johnny Carson.

Mr. Baseball, Bob Uecker is a nice little piece on a Hall of Famer and legend. It’s an intimate and fulfilling experience if you are a fan of this man. I am, so I enjoyed it greatly.

And since there isn’t a trailer available, enjoy one of Uecker’s Miller Lite commercials.

Rating: 7.5/10
Pairs well with: The Battered Bastards of Baseball, No No: A Dockumentary, Ken Burn’s Baseball.