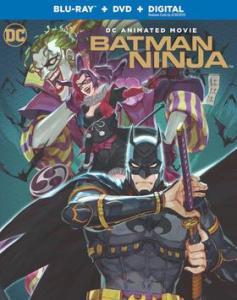 “This is madness.” – Batman

The only reason I checked this out is that it’s on the DC Universe app, which I now have and am trying out. Other than that, I didn’t have much interest in this.

However, some of the character designs looked cool and I thought that this might just be bonkers enough to be enjoyable. The problem is that I only made it about twenty minutes into the film before I regretted hitting the play button.

Cool and interesting character designs don’t mean much outside of a sketchbook of conceptual art. You have to apply these cool looking characters in an engaging and dynamic way and this anime fails to do just that.

The story is all over the place, makes little sense, I can’t tell what the hell is happening through most of the film and there’s a big mecha battle because this is Japanese and it can’t exist without a big mecha battle.

This is a bunch of cool, unrelated shit thrown into a blender without little care as to whether or not it would blend well and be enjoyable, let alone remotely palatable. I had an uncle that had throat cancer and for awhile, he had to blend up every meal. His face while drinking his meals was similar to mine while trying to drink in this movie.

Batman Ninja is abhorrent and it should not have been made. It’s existence reminds me of the most famous of all of Dr. Ian Malcolm’s quotes: “Your scientists creators were so preoccupied with whether they could, they didn’t stop to think if they should.”

“If I die, I’m going to do it stoned and smiling in my bed.” – Mike Howell

I went into American Ultra with no expectations. Although I did like the chemistry between Jesse Eisenberg and Kristen Stewart in Adventureland and thought that it was Stewart’s best performance that I had seen.

So maybe their having worked together so well before is why they felt very comfortable in this movie and with each other. Their relationship felt natural and nothing seemed forced or out of place. As the two leads, Eisenberg and Stewart shined.

As far as the plot goes, this film doesn’t really tread new territory but it doesn’t need to. It is about a “fish out of water” sleeper agent for the C.I.A. who has woken up in an effort to save himself from the agency director who thinks he’s a dangerous dog that needs to be put down. In this film, the agent is a stoner with a lot of phobias. Of course, the phobias are all stuff that the agency put in his head in an effort to control him.

Eisenberg and Stewart are backed up by a great cast. Topher Grace plays the C.I.A. asshole that wants Eisenberg’s character dead. Then there is John Leguizamo who plays a friend and drug dealer. The great Walton Goggins shows up as a psychotic agent named Laugher. Bill Pullman plays a high ranking C.I.A. official that mixes things up in the end. Tony Hale a.k.a. Buster from Arrested Development plays another C.I.A. agent that is caught between doing good or doing evil. And then Connie Britton rounds out the cast as the C.I.A. agent who is trying to save the main characters.

The film was well shot, well edited, perfectly paced and came off as a lot of fun. It wasn’t a flawless film but it wasn’t littered with issues and even the unbelievable elements felt believable, in the moment, and that is what a director should strive for.

American Ultra was entertaining. It ends the summer movie season and it was at least a refreshing end to a summer full of a lot of crap. This wasn’t a big budget CGI fest yet it achieved much more than most of the other summer movies I had to sit through this year.

I guess it is left open for a sequel but one isn’t necessary. This isn’t a forgettable film but it doesn’t warrant any more installments. I liked it for what it was and the filmmakers should let it stand on its own. Besides, I don’t anticipate this being a sleeper hit.

At this point, I think a lot of summer moviegoers are suffering from tent pole fatigue. While this is a good contrast to the tent pole feature, it will probably suffer for the date it was released. If this were a late September or early October film, it may have had more of a chance for success. Instead, it shares the docket with Sinister 2 and Hitman: Agent 47 – all three of these will probably underwhelm at the box office between coming out on the same day and following a slew of mediocre summer movies.

Rating: 7/10
Pairs well with: Adventureland for having the same leads, as well as the Kingsman movies for some similarities.