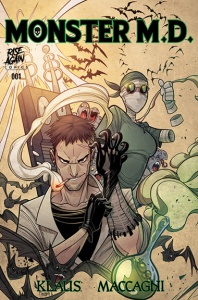 I backed this comic’s campaign on Indiegogo awhile ago but it’s one that I was really looking forward to, as I love comedy/horror comics and it’s been awhile since I’ve read one that I really enjoyed.

This was well worth the wait but since I had my expectations grow with each of the campaign’s regular updates and teased content, the wait was tough. Kind of like watching a great film trailer and then seeing at the end that it doesn’t come out for another year. Although, film trailers rarely have that effect on me anymore, so it was cool having that experience again and in the form of a comic book.

Monster M.D. checked all the boxes for me in what I was looking for in a comic.

I got strong Re-Animator vibes from this and it also brought my mind back to the early days of the comic series Hack/Slash, when it was one of my favorite comic book series, a decade and a half ago.

I don’t really want to spoil any of the plot but I will say that I’m happy this leaves things open for future chapters. It’s a really cool concept that takes place in a cool, fun universe and I’m pretty sure I’ll back future campaigns, as well.

In regards to the art, it’s really dynamic, colorful and just fits the tone of the story while also enhancing it. And frankly, that’s what comic book art should do. Plus, we don’t see a whole lot of “dynamic” art in mainstream comics these days, which is why I prefer supporting the indie creators out there.

Out of all the Comicsgate associated projects that have come and gone over the last few years, I have to say that this is the one that impressed me the most. Some of that might have to do with this being more up my alley, narratively and stylistically, but its eventual sequel has me more excited than anything else that’s out there.

Fucking kudos to all the creators involved in this!

Rating: 9.25/10
Pairs well with: other horror themed comics with comedic flavor, as well as other Comicsgate associated releases.