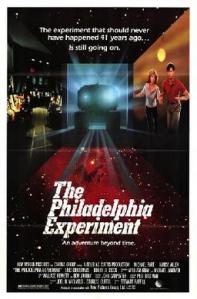 “You know, I got it all figured out… Navy owes me 40 years back pay.” – David Herdeg

In my mind, I thought that I had seen this movie once or twice, as a kid. I was wrong. I have never seen this until now and my memory played tricks on me by conflating images of other movies that may not even be remotely accurate. Hey, I’ve done some drugs at different points in my life.

Anyway, I thought that this was a really weird movie, even for ’80s standards and the story was pretty wonky. Still, I did enjoy it and I really liked the bond that developed between the leads: Michael Paré and Nancy Allen.

The story is about these two Navy seamen that were aboard a ship during a strange experiment where the Navy were trying to make the vessel invisible to give them a tactical advantage during World War II. This experiment made the ship vanish but with that, the two seamen were transported through time to 1984. The time travel also gave them some weird sci-fi side effects and one of the men keeps having seizures and electrical phenomenon happening to his body until he eventually explodes into pure energy and disappears. The rest of the film is a race against time, as Michael Paré’s character is trying to solve his dilemma before the same fate happens to him.

This is also an “on the run”/road trip movie similar to Starman and other films where a protagonist is trying to outrun and outwit authorities in an effort to reach their goal.

I liked Paré a lot in this and I always thought that he was an underutilized actor that should’ve reached bigger heights in the ’80s. I also liked Nancy Allen too but she’s been a favorite of mine ever since I saw the original RoboCop, as a wee li’l lad.

The film is entertaining and it was a cool picture in spite of its hokiness and strange premise. It is slow in a few parts and the climax is a bit weird but it’s still a worthwhile experience. Granted, I don’t know if it’s something I’ll ever go out of my way to watch again.